The Washington Redskins are one of the more interesting teams of the 2020 NFL season.

No, they likely won’t be the best team in the league. In fact, according to the oddsmakers, they will probably be a lot closer to the bottom than anything else.

However, they also have a young and exciting core. A core that has a sophomore quarterback with a ton of young weapons. They also have some incredible defensive talent. That includes rookie pass rusher Chase Young, someone that many believe not only has star potential, but will already be a menace in year one.

What about the players that haven’t reached their potential yet though? Who will be the biggest breakout players for the Redskins in the 2020 NFL season?

Let’s take a look at the roster and try to predict who will be the top three.

Honestly, this could have been a number of receivers. In the end, it was whittled down to two though.

You see, Terry McLaurin already had a breakout year last season. And Antonio Gandy-Golden is a rookie, so it sounds weird to say he’s going to “breakout”. Due to that, it was either going to be Steven Sims Jr. or Kelvin Harmon.

Sims Jr. has more of an inside track to the field though. Both should get a lot of playing time and put up good numbers. Harmon will be competing on the outside though. Sims Jr. is likely to be the guy in the slot.

Sims took major steps near the end of last year. And now Washington has a few more weapons. They also have a quarterback that will have more time under his belt and a lot more time spent with the receiver.

Not only could Sims Jr. be a breakout player for the Redskins. He could find himself becoming one of the more dangerous slot receivers in the NFL.

Seriously, go back and look at his last few weeks. I’m not even just talking about the stats (although they were solid). Look at the route running, look at the release and the run after catch. Look at all of it and tell me Sims Jr. is not poised for something big in 2020.

Let’s be clear here. Montez Sweat was awesome in his rookie season in 2019 despite a lot of fans bashing him for most of the season.

The pass rusher finished the year really strong and ended the year playing all 16 games. In that time, he had 50 tackles (eight for loss) and seven sacks. Sweat also recorded two forced fumbles and two fumble recoveries.

In 2020 a few things will be different. First of all, Sweat won’t need time to get acclimated to the league. He’s already ready to go.

Second, and this is the big one, Chase Young. Young is a star. He’s immediately going to be the most feared pass rusher on the Washington defense. And think of what that’s going to do for Sweat. Suddenly he will be getting the easier assignments. He won’t be seeing the double-teams.

Sweat already had the potential to turn into a superstar, All-Pro-type of player. Well, now that might be fast-tracked a bit.

Sweat is poised for a big year in 2020 and the whole world is about to be put on notice.

I already kind of alluded to this earlier. Dwayne Haskins is set for a breakout season in 2020. And if you really don’t think he’s shown signs that it’s coming, you don’t want to see them.

No, Haskins’ rookie season was far from perfect. Can people stop pretending like he went out that and his pants fell down though?

Haskins was more-than-capable most of the season. Especially considering his top three targets were all rookies right there with him. And two of them (Harmon and Sims Jr.) were taken in the sixth round (Harmon) or later (Sims Jr. went undrafted).

The quarterback came on strong at the end of the year. Now he looks like he’s in better shape than he’s ever been. He’s also had a lot of time to build a serious rapport with his weapons. Weapons that are growing and improving right there with him.

The Redskins also did a seriously underrated job of getting Haskins some extra help in this draft. They added Antonio Gibson and Gandy-Golden, as well as Thaddeus Moss.

Haskins looked a lot better in his rookie year than a lot of people will admit. Now he’s ready to crank it up a few notches in 2020 and truly break out. 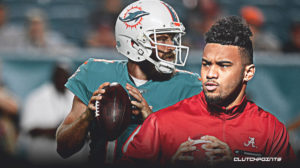 In new Avatar, Biking Queens serves the corona warriors and community during lockdown

Matrix Filmmaker Comes Out as Transgender