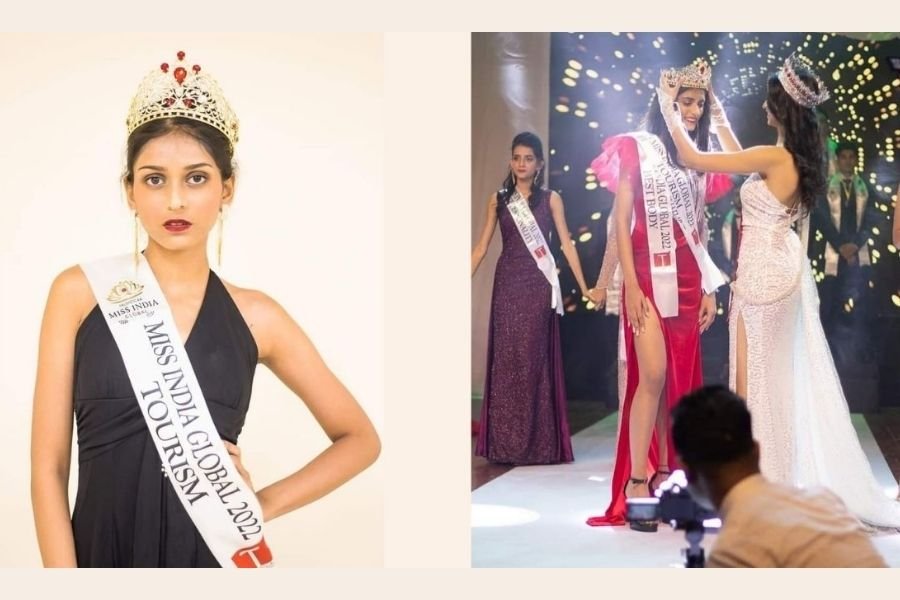 May 27: Pragya Anand made the people of India proud after winning the Miss India Global Tourism 2022 crown at the pageant held in Navi Mumbai on 13th May 2022. The stunner also won the subtitles for Best National costume, Beauty with Purpose and Best body. Pragya will now represent India on an international platform later this year. The glittering event saw finalists from different states participate in “Miss India Global 2022” was organised by Talenticaa.

Pragya Anand on winning the title “Miss India Global 2022 Tourism”, commented, “In the competition, there was a national costume round where one has to showcase the culture of one’s state, and I chose to wear the traditional costumes of Bihar.” Pragya dedicated her success to her supportive and caring family.

Pragya was looking stunningly gorgeous in the traditional Madhubani painting inspired attire that she designed herself and with the help of her parents. The young model wanted the costume to propagate the message of peace and harmony and awareness about the state’s local art and culture. Hence, she carefully picked up the theme of Lord Buddha and a replica of Vaishali’s Ashokastambha for her outfit.

The confidence and charisma that Pragya displayed on the stage were outstanding. The girl was and is very vocal about the upliftment of the transgender community. During one of the subtitle rounds on Beauty with Purpose, her dialogue strongly advocated making the lives of transgender people financially stable and with equality. The judges were quite impressed and crowned her as the winner for that particular round.

Born in Pune to parents Priyanka Anand and Agast Anand, Pragya and her elder brother Priyanshu were sent to a boarding school to get their elementary education. She states that she wanted to enter the glam world from the very beginning, but during her childhood, she lacked confidence and suffered from low esteem. The diva was once quite insecure about her appearance. Her brother inspired her to let go of her insecurities and believe in herself. Again, her grandmother (Aita), a sitarist, motivated her to explore new things and participate in extra curriculum activities.

When Pragya turned 17, she participated in a Teen pageant and won Miss Best Ramp walk. Inspired by model turned actress Priyanka Chopra, she started preparing harder to achieve her goals by joining a pageant class. Pragya believed that learning from the experienced ones would help her explore herself and shape her more.

Her father, a filmmaker and an actor by profession encouraged the 18-year-old girl to study Film, television, and New Media Production at Usha Pravin Gandhi College, Mumbai University. Moreover, the diva draws her passion for making a change in society, especially concerning the LGBTQ community, the environment and other youth issues. She got inspired by her mother, Priyanka Anand, a Human Resource professional in an MNC.

In the past six months, she shot a documentary on a cafe completely run by the transgender community; she wrote a story on autism and directed a short film on the women who are independently working.

Pragya Anand is a balanced girl who manages well between her studies and her aspiration to become a top model. Presently, the young fashion model is preparing herself for an International platform where she will be representing India for “Miss Eco-Tourism World.”