Former NBA star Jerry Stackhouse was not among those who expressed concern over Michael Jordan’s decision to return to the league in 2001.

Stackhouse was a member of the Detroit Pistons for the deal that sent him to the Washington Wizards – in fact, he was a double All-Star.

While Richard Hamilton (who did the opposite) and the Pistons reached the top of the NBA in 2004, Stackhouse, as a member of the Wizards, felt nothing but disappointment for Michael Jordan.

Honestly, I wish I had never played in Washington, for a number of reasons, said Jerry Stackhouse of Ben Pickman of Sports Illustrated. I had a feeling we were going to Detroit before we were traded. It was really hard to be in a situation with an idol that made me feel like I was the best player at the time.

There were still things going on with Michael Jordan, he moved on. Doug Collins, I love Doug, but I think this was a chance for him to make up for what could have happened to them in Chicago. Well, almost everything Michael wanted to do… We had a pretty good start and he didn’t like the way the attack went, because he walked a little more through me. Of course he wanted some more isolation for him at the station, so we had more isolation for him at the station. And it went a little wrong, so I didn’t like it at all this season. The image I had in my head with Michael Jordan and the respect I had for him, I lost some this year.

The Wizards never made the playoffs in the two seasons of Jordan’s return to the team, and that period also marked the demise of Stackhouse from potential superstar to regular NBA season blacksmith.

The two men may have a collegial relationship with the UNC, but Stackhouse has lost some respect for Jordan in Washington. 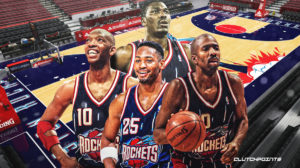