Atlanta star Hawks Tray Young thinks his personal A might change after watching ESPN’s 10-part documentary about Michael Jordan and the Chicago Bulls.

In March a young man twittered his top five, earning the first place of Lebron James.

But Yang said Sunday: I think this documentary will put me MJ first, not second…

I think this documentary is gonna put me on MJ number one instead of number two…
I can’t wait. #Last dance #

The premiere of the documentary film Last Dance will take place on Sunday, April 19 at 21.00 on ESPN. EAST – with ESPN working on two new episodes five weeks in a row.

Trey Young is part of a new wave of players who grew up with Kobe and LeBron, so it makes sense that they are both in his personal top five. After all, the Hawks All-Star wasn’t even born when Jordan and the Bulls won their sixth championship in the 1997-98 season.

However, Yang seems to be vulnerable to possible changes as the Hawks’ sniper and the rest of the basketball world await the long-awaited documentary.

The final dance follows Jordan and the bulls during the aforementioned 1997-98 campaign and includes interviews with former players and various celebrities. The project was originally planned for June, but ESPN postponed the broadcast until later to fill the programme because no sports were played during the coronavirus pandemic.

The young man can only strive for greatness from players like Jordan and Lebron, although he certainly seems to be going there. The 21-year-old was in the middle of his historic second season with the Hawks prior to his suspension and averaged 29.6 points, 9.3 assists and 4.3 rebounds in his first 60 games. 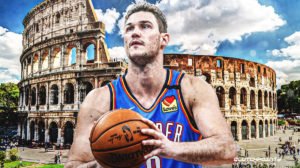